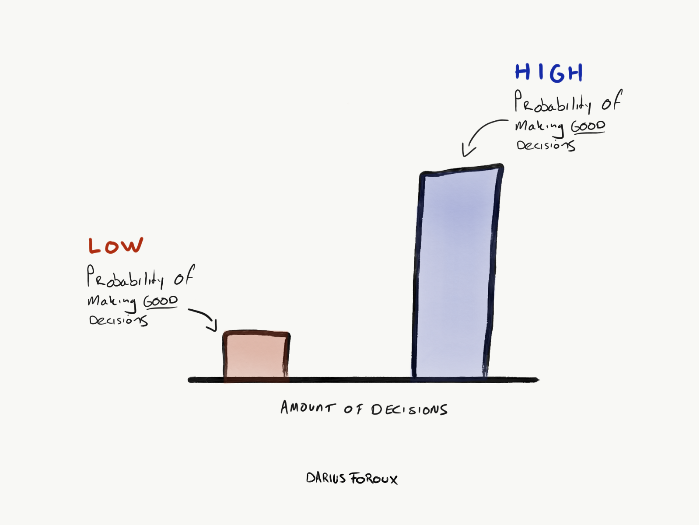 Do you ever look back on your decisions and think, “Why I on earth did I do that?”

We all make bad decisions.

Buying an SUV that sucks up all your cash
Starting a relationship without being in love
Saying yes to a job that you’re not passionate about
Creating products that no one needs
Stuff happens (the above examples are all about me). But the funny thing is that bad decisions never seem like bad decisions in the moment.

I’ve been reading about the decision-making process of Warren Buffet and Charlie Munger, two of the most successful investors of all time.

In Alice Schroeder’s biography of Warren Buffett, I read that Buffet and Munger have a learning strategy that’s based on what you should avoid doing. They identify mistakes and do their best to avoid those mistakes.

But as Charlie Munger says:

“Smart people do dumb things.”
You can never avoid making a mistake. However, you can do your best to avoid making dumb decisions.

Plus, by learning from other people’s mistakes, you can make their mistakes your own. You’ll learn faster that way.

Don’t Overthink.
Smart people are way too preoccupied with doing the right things. They want to have the perfect life, career, house, business, car, holiday, etc.

When you put too much pressure on yourself to make the right decisions, you get analysis paralysis.

I recently spoke to a friend who wanted to make a career move. I asked him to walk me through his thinking process:

“I like the company I work for, but my job isn’t engaging anymore. I’ve been doing this work for four years. And sure, I’ve been promoted twice, but it’s still the same work. So I’ve been looking at other companies. But what if I go somewhere else and that doesn’t work out? I’ll have to move on quick. And that won’t look good on my resume.”
I remained silent.

“Just hearing myself talk leads me to another thing: Overthinking it.”
We both laughed our assess off. I can do the same with overthinking. And I bet you’ve been there too.

When you overanalyze every single decision, you become paralyzed. Result? Nothing. Now, that’s a bad outcome!

That’s how people end up wasting their lives.

The only way you can stop overthinking is making yourself aware of your thinking process. When I asked my friend about his thinking, he became aware of how irrational his process was.

You can’t control the future. So stop thinking about it.

Do This Instead: Make Small Decisions. Decide Often.
I recently read Seeking Wisdom by Peter Bevelin. It’s about the way Charlie Munger thinks. One of his decision-making strategies is to avoid mistakes. But that can be interpreted in different ways.

You can fear decisions altogether because you might make mistakes. What happens is that you don’t make decisions at all. As Munger says:

For example, I’m not happy with the email provider I use to send out my newsletter. Their support is slow, there’s no good integration with my online courses platform, and readers have complained about not getting my newsletter.

This is something that’s on my radar for more than 1.5 years. At the time my list was less than half of the size it’s today. I also had only one online course. Now, I have three.

The hassle of moving to another provider gets bigger every day. Had I moved early, it was easy. By now, it’s a painful process.

In life, it’s exactly the same. The longer you stay in a bad relationship, the harder it gets to leave. It’s also true for your job.

Earlier Decisions Lead To Better Decisions
The earlier and more you decide, the more chance that you make better decisions.

I often say that there are no right or wrong decisions — only decisions. That’s not entirely accurate. Of course, there’s a difference in the quality of our choices. That’s the topic of another article.

But here’s the thing: NOT making a decision is also a decision. It’s a choice to put things off until “another time.”

So in effect, you’re making decisions all the time. Instead of making fewer decisions, we need to make them earlier.

Because all you need are a few good choices in your lifetime anyway. What will be your best? You only find out after, you guessed it, you’ve made a decision.

This article was originally published on DariusForoux.com